To share your memory on the wall of Audrey Henson, sign in using one of the following options:

Provide comfort for the family of Audrey Henson with a meaningful gesture of sympathy.

We encourage you to share your most beloved memories of Audrey here, so that the family and other loved ones can always see it. You can upload cherished photographs, or share your favorite stories, and can even comment on those shared by others.

JoAnn Love and family, Jon and Jennifer Carr, and others have sent flowers to the family of Audrey Henson (France).
Show you care by sending flowers

Posted Jul 19, 2019 at 04:50pm
Audrey is going to be missed by her water walking buddies at Sutton Pool. She enjoyed walking with us and talking about her trips with the family We lost are ABC team. Bonnie, Connie, and Carole
Comment Share
Share via:
SR

Posted Jul 19, 2019 at 11:35am
We were so sorry to hear of Audrey's passing. She was an amazing lady! and we have many fond memories of Audrey, George and the whole family from when I was growing up. Love and prayers to you all.
Sharon Love Ryder
Comment Share
Share via:
JF

Posted Jul 18, 2019 at 02:56pm
Tom, Sue, Lauren and Luke, we are so sorry to learn about your loss of your Mom and Grandmother. Thinking of you during this difficult time. 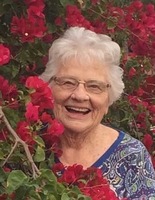