To share your memory on the wall of Bruce Ferguson, sign in using one of the following options:

Bruce was born June 20, 1931 in Chicago, IL, son of Joseph and Elspeth (Archer) Ferguson. He attended LeMoyne Elementary and graduated from Lake View High School, in Chicago. He received his bachelor’s degree from the University of Dubuque, his master’s degree from Northern Illinois University with doctoral work at The Ohio State University.

On August 7, 1954 he married Carol Capp and together they raised five children.
Bruce was a lifelong educator and mentor, teaching in the field of physical education for over 40 years.
Bruce was a member of First Congregational United Church of Christ in Naperville and also belonged to the Illinois Association of Health Physical Education and Recreation where he served as President of the Midwest Region. He enjoyed his association with the University of Dubuque where he served in various capacities. He thoroughly enjoyed his summers at Pinecrest Resort on Barker Lake in Winter, WI which he and Carol operated for more than 40 years. He greatly enjoyed fishing and spending time with family and guests. He was also an avid swimmer and a big Cubs fan.

In addition to his parents, Bruce was preceded in death by a son, Randy (in childhood).

Special thanks go to the wonderful staff at Luther Manor; Dr. Jacobitz-Kizzier, and Dr. Meurer; and the staff at Hospice of Dubuque for their compassionate care.

The family would also like to thank Bradley Rudi, good friend and helper in Winter, WI.
Read Less

Receive notifications about information and event scheduling for Bruce

There are no events scheduled. You can still show your support by sending flowers directly to the family, or planting a memorial tree in memory of Bruce W. Ferguson.
Plant a Tree

We encourage you to share your most beloved memories of Bruce here, so that the family and other loved ones can always see it. You can upload cherished photographs, or share your favorite stories, and can even comment on those shared by others.

Posted Nov 14, 2019 at 08:11pm
The Prices (from Dallas) send our love to Carol and the rest of the family. Time and distance have separated us, but we have fond memories of wonderful family gatherings. Maybelle loved Uncle Joe, Ronnie, and Bruce!

Posted Nov 03, 2019 at 12:02pm
Bruce, Ed Sellers, and Ambrose Bradenton must be holding Midwest Conventions, aka the biggest party they can, up there. Enjoy guys.

Posted Nov 02, 2019 at 11:22am
Dear Carol and Family,
I worked in Activities at Luther Manor last year and often talked with Bruce during lunch, encouraging him to finish so we could get him to an upcoming event (he loved to linger and just people watch rather than eat!). His smile and good nature were infectious! I will fondly remember him sitting in the center space each morning as I arrived, reading the paper and greeting me
with a smile.
Blessings and prayers to all.
Patti Evers
Comment Share
Share via:
BP

Posted Oct 28, 2019 at 11:21am
We are sorry to hear of Bruce's passing but we are comforted by great memories of family time with the Ferguson family. They always treated us as family members whether in Naperville, Winter or St Pete Beach. My children have terrific memories of the many years at Pinecrest and all the family oriented times there. Thanks be to a terrific and loving family....and blessings/thanks for Bruce's kindness and a life well lived.
Buzz Patters
Comment Share
Share via:
DG

Posted Oct 24, 2019 at 09:00pm
Bruce inspired so many young people and even many adults. The way he brightened a room with his smile, the way he led groups of people to make wise decisions, and the love and respect he showed to all people gave me a role model to follow. I thank everyone who cared for him . As a leader at the University of Dubuque, his name was well known. My heartfelt sympathy to Carol and the family for the loss of a wonderful man. His memory will always be with me.
Comment Share
Share via: 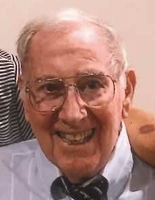 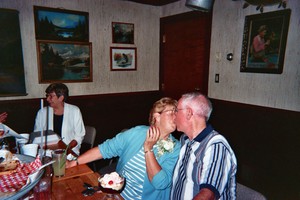