To share your memory on the wall of Calvin Burnes, sign in using one of the following options:

Calvin was born August 11, 1939 in Dubuque, the son of Elmer Burnes and Margaret (Meisenburg) Burnes Howell. He attended Jefferson Jr. High and Dubuque Senior High. At the age of 15, Calvin met his lifelong love Janet Folsom, and they were married on October 12, 1957. They spent 60 wonderful years together until her passing in 2017.

Calvin started working at the age of 10, delivering newspapers and ice. He served in the Army Reserve. Cal continued working on the railroad, the Dubuque Packing Company, and farming, as well as working for John Deere Dubuque Works for 30 years until his retirement.

In addition to his wife, Cal was preceded in death by his son Tim; his parents; his brother Ronald (Pat) Howell; his parents in law, Mildred and Herb Berry; his sister in law Judy Hulburt; and his brother in law Doug Patterson.

Memorials may be made to the Sunnycrest Manor Auxiliary.

The family would like to thank the entire staff at Sunnycrest Manor for their care and comfort for Cal and their love and support for the family.
Read Less

To send flowers to the family or plant a tree in memory of Calvin R. Burnes, please visit our Heartfelt Sympathies Store.

Receive notifications about information and event scheduling for Calvin

We encourage you to share your most beloved memories of Calvin here, so that the family and other loved ones can always see it. You can upload cherished photographs, or share your favorite stories, and can even comment on those shared by others.

Lisa and Jennifer Pershing, Andy & Denise Helle, and other have sent flowers to the family of Calvin R. Burnes.
Show you care by sending flowers

Posted Jun 09, 2020 at 11:17am
I worked with Cal for 30 years at John Deere's and we had many good times and he will be missed. Jerry Marty
Comment Share
Share via:
LP

Posted Jun 09, 2020 at 10:56am
Please accept our most heartfelt sympathies for your loss... Our thoughts are with you and your family during this difficult time.

Flowers were purchased for the family of Calvin Burnes. Send Flowers

Posted Jun 08, 2020 at 07:42am
Please accept our most heartfelt sympathies for your loss... Our thoughts are with you and your family during this difficult time.

Posted Jun 06, 2020 at 11:07pm
Our deepest sympathies to you and your family. May the soul of your father/grandfather be at peace with our Heavenly Father. 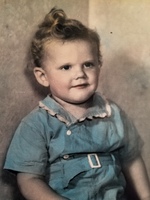