To share your memory on the wall of Charles McCormick, sign in using one of the following options:

Provide comfort for the family of Charles McCormick with a meaningful gesture of sympathy.

Upon returning from military service, Charlie began his 39 ½ year career at Loras College. He worked in the business office at Loras from 1957 to 1968. Then in 1968 he became the first Director of Financial Aid in Loras College history, a position he held until his retirement in 1996. In 2010 he was awarded a distinguished Alumni Award for his service. In his role at Loras College, he was instrumental in helping thousands of students finance their college education. He then watched as they graduated and went on to lead happy and successful lives. Charlie considers this – the students that he helped – as his legacy.

After his retirement, Charlie also worked as a chase driver for Truck Country from Oct 1996 until 2006.
Charlie married Edna Hargrafen on October 18, 1958, at the Church of the Nativity. She preceded him in death on July 11, 1974. On August 2, 1979, he married Lela (Sweeney) Dunn at St. Columbkille’s.
Charlie really enjoyed his life. He grew up on a farm, and that gave him an appreciation of all of God’s creation. He liked being outdoors. He deliberately tried to love and laugh every day. He prayed daily and trusted in God. He felt so thankful because he had a career that he loved and a life that he loved surrounded by people that he loved…and a whisky Manhattan every night. Living to him was joy. He wouldn’t want people to feel any sorrow at his passing.

Those who knew Charlie knew of his unique passion for fun and shenanigans. Let’s honor his memory by following his example and strive to create more love and laughter in this world. Charlie was proud to be from Harpers Ferry Iowa. He grew to love Dubuque and was a member of the Serra Club, American Legion Post 6, and past member of St Columbkille’s school board.

Charlie was challenged with Alzheimer’s the last eight years of his life. It slowly robbed him of his vitality, but it did not dim his spirit. He marched on bravely and steadfastly, living each day to the fullest extent that he could.

Charlie’s quality of life was greatly enhanced by availing himself to the resources offered in this community, as he needed them.

Over time, the assembled team of care givers served him well. Dr. Mark Runde and his staff at Medical Associates were key in this journey. Also helpful were the caring and compassionate staffs at Mercy Medical Center, Manor Care, Paramount Transfer Service, Cozy Corner Adult Daycare, the entire Medical Associates Campuses; and then recently, Hospice of Dubuque.

Perhaps the most critical component of Charlie’s well-being was a cadre of care givers from Luther Manor Services. They took care of him on a daily basis, with the utmost compassion and dignity. We will be forever indebted to Julia, Linda, Kay, Marsha, Annie, Karen, Patty, Alex, and Wendy and others throughout the years; without you, Charlie’s life would not have been so active and enriched. The patience and care shown by these professionals in the face of this often- frustrating disease was truly awe inspiring. We, the McCormick family, salute you all, and thank you all.

He was also preceded in death by a son, Tim, in infancy; a grandson, Tim Kusterer; four brothers, twins James and John in infancy, Emmett and Gene McCormick; and a sister, Evelyn Welper.

In lieu of flowers, memorials may be made to the James and Helen McCormick Scholarship Fund at Loras College.
Read Less

Amy and the Nigg Clan, House of Mercy Management and Staff, and others have sent flowers to the family of Charles D McCormick.
Show you care by sending flowers

Posted Jan 31, 2019 at 12:31pm
We first met Charlie when we were students at Loras College where every single student knew Charlie as Director of Financial Aid. Then, I was able to call him a colleague from 1987 until his retirement ten years later. He had a smile and a kind word for everyone which contributed to making Loras a family rather just a place where one worked. We always thought it was wonderful that his step-daughter, Julie, continued his work and kept Loras College Director of Financial Aid in the family. Charlie lived a long life and we were fortunate to have had a part of him in it. Sending you our heartfelt condolences. -ML & Jim
Comment Share
Share via:
KR

Posted Jan 30, 2019 at 01:14pm
I am SO sorry for your loss. Charlie was a great guy. I wad unable to make it to the services, but you are all in my thoughts and prayers.
Sincerely,
Karen(Anglin)Rausch
Comment Share
Share via:
Posted Jan 30, 2019 at 10:55am
Prayers for Charles, Lela and family in his honor.
Fr. Paul Otting
Comment Share
Share via:
AN

Posted Jan 29, 2019 at 07:21pm
McCormick Clan, I cannot even begin to share all the love in my heart for Charlie. Mitch, captured many of my thoughts exactly in her post; exactly how I remember him. There are few humans on this earth like him; that smile, that laugh, that twinkle, and that heart! And what a great group of people he left to carry on in his spirit. I will miss him, but just imagine the reunion with Jack and Joan -- I can almost hear the laughter! Take care of each other as you move through your new normal. Peace to you all, Amy Nigg
Comment Share
Share via:
AC

Amy and the Nigg Clan

Posted Jan 29, 2019 at 05:31pm
Sorry to not be there with my sibs to celebrate Charlie's amazing heart & spirit! Let wonderful, silly stories bring comfort! Love and Hugs to all!

Amy and the Nigg Clan purchased the Medium Dish Garden for the family of Charles McCormick. Send Flowers 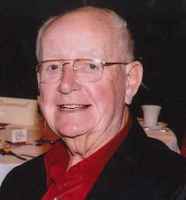 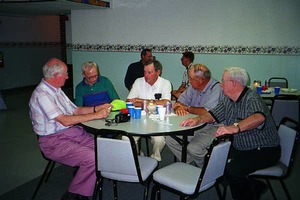