To share your memory on the wall of Christopher Young, sign in using one of the following options:

Provide comfort for the family of Christopher Young with a meaningful gesture of sympathy.

Visitation will be from 4:00-7:00 p.m. on Thursday, March ... Read More
Christopher John Young (Chris), 53, of Lone Tree, Colorado, formerly of Dubuque, passed away at Sky Ridge Medical Center surrounded by his loving family on Sunday, March 10.

Visitation will be from 4:00-7:00 p.m. on Thursday, March 28th at the Egelhof, Siegert and Casper Westview Funeral Home and Crematory, 2659 Kennedy Road where there will be a wake service at 6:30 p.m. A Mass of Christian Burial will be held Friday, March 29th at 10:00 a.m. at St. Joseph the Worker Catholic Church with Rev. Tom McDermott officiating. Burial will be in Mt. Olivet Cemetery, Key West.

Chris was born on July 19, 1965 in Dubuque, son of John and Janet (Hendricks) Young. He loved roaming the hills behind his house, fishing in the Mississippi River, playing golf, softball, baseball, sledding, and skiing on Snowmad Hill. He graduated from Dubuque Senior High School where he was an outstanding wrestler and participated in the State Wrestling tournament. Later he moved to Colorado where he continued his love of the outdoors. Throughout his life he was a devoted Green Bay Packer fan but after living in Colorado he cheered for both the Packers and Denver Broncos. Chris and his friend Jeff Lukens worked together on opening a painting company, Tri-Plex Painting, where he worked for 23 years.

Chris loved spending time with his children, grandchildren, his extended family and many friends. He was a kind, loving and gentle man who always had a smile on his face and a twinkle in his eye. Chris recovered from cancer five years ago but continued to battle numerous health issues with a determined spirit and an upbeat attitude.

In lieu of flowers, memorials may be given to the Anna Weitz Foundation or Dubuque Rescue Mission.

A Celebration of Life in honor of Chris was held on March 16th in Colorado.
Read Less

To send flowers to the family or plant a tree in memory of Christopher J Young, please visit our Heartfelt Sympathies Store.

Receive notifications about information and event scheduling for Christopher

We encourage you to share your most beloved memories of Christopher here, so that the family and other loved ones can always see it. You can upload cherished photographs, or share your favorite stories, and can even comment on those shared by others.

Curt and Renee Schaller and Family sent flowers to the family of Christopher J Young.
Show you care by sending flowers

Posted Mar 26, 2019 at 07:42pm
(Left to Right:) Jeff Lukens, Chris Young, Jim Kieffer, Rob Johnson (1989-Aurora, Colorado).
Chris was a big part of my life not only in high school, but in Colorado too. Lots of memories. God bless John, Janet, Kevin, Kerry, Chelsea, Olivia, Kara, and rest of family. 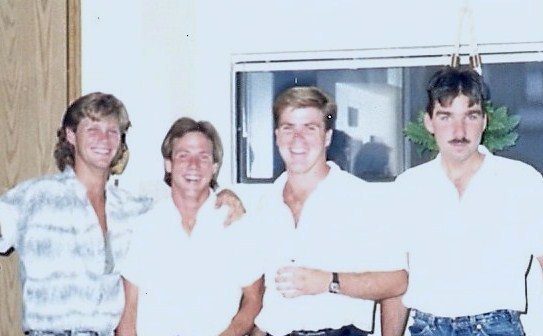 Posted Mar 26, 2019 at 12:31pm
Such a loss in this world. I remember Chris as always smiling. I always will. May you find peace during this time of sorrow.
Comment Share
Share via:
CF

Curt and Renee Schaller and Family

Curt and Renee Schaller and Family purchased flowers for the family of Christopher Young. Send Flowers 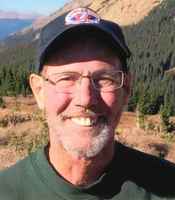 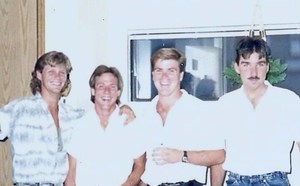