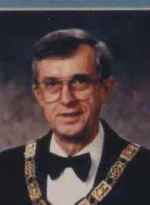 Donald Keith Robertson, 84, of Dubuque died Saturday, March 21, 2020 at Luther Manor. In keeping with current restrictions on public gatherings, a private committal service will be held at Garrison Cemetery, Garrison, Iowa.
He was born November 11, 1935, son of Harry and Mattie (Noeller) Robertson. He graduated from Shellsburg High School and Northeast Area One.
He served in the US Army June 2, 1958. Two years active duty and 2 years reserve. He worked in a variety of department stores and later became a realtor.
He was an active member of Grandview United Methodist Church.
He received the three degrees of Symbolic Masonry in Mosaic Lodge No. 125 in 1972. He served as Master of this Lodge in 1977 and again in 1986. At the end of 2019 he retired as Secretary of the Lodge after serving in that office for twenty-eight years.

For many years he was an adult leader in Dubuque for Allen Chapter of the Order of DeMolay and was awarded the Cross of Honor and the Honorary Legion of Honor.

In addition to his membership in Mosaic Lodge, he was also a member of the Dubuque York Rite Bodies, Clinton Scottish Rite, and Julien Chapter No. 125 of the Order of the Eastern Star.

He is survived by his sister, Marilyn (Floyd) Petersen of Kingston, New York, their daughters, Dawn (Rob) Overton and their son Blake, and Colette Tighe; a sister in law Betty Robertson and her sons, Rick Robertson and his children, Sydney and Clark Robertson; Craig (Sherri Mullinex) Robertson and children, Cody Robertson, Alex Springer, Brittany (Aaron) Seaton and their Children, Camden and Reagan.
He is preceded in death by his parents and three brothers, Wayne, Harold and Kermit Robertson.
Memorials may be sent to the Egelhof, Siegert and Casper Funeral Home, 2659 Kennedy Road, Dubuque, Iowa 52002 and will be forwarded to the family.