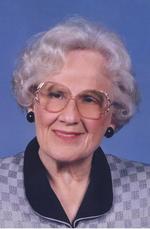 A memorial service will be held at Westminster Presbyterian Church on
August 3 at 11 a.m., followed by a luncheon. Burial will be in
Linwood Cemetery.

Betsey was born in Dubuque, Iowa on July 15, 1926, the daughter of
Sidney and Bertha (Witchall) Creswick. She graduated from Dubuque Senior
High School and received her baccalaureate degree from the University of
Dubuque in 1947. On October 28, 1951 she married John Sterling Shifflett
at the University of Dubuque chapel. They spent 42 happy years together
and were blessed with four children before John passed on January 27,
1993. Betsey was a social worker for four years before getting married.
She obtained a teaching certificate in 1972 and taught mostly third
grade for 18 years, including one year at Hoover Elementary School and
17 years at Lincoln Elementary School, the same place that she went to
grade school.

Betsey was a lifelong member of Westminster Presbyterian Church and a
longtime member of the choir. She also served as a Deacon and a Stephen
Minister. She served on the board at Mt. Pleasant Home, volunteered at
Finley Hospital, and was an active member of the National T.T.T. Society
and P.E.O. International.

Betsey was the recipient of the Governor’s Award for teaching English to
students from other countries at N.I.C.C. She and her husband sponsored
a family from Vietnam following the fall of Saigon in 1975.

Betsey was an avid Cubs fan. She played piano and was a talented artist.
All of her children have her art hanging on their walls, and one of her
paintings was used for the cover of the book "Homespun Iowa." She always
enjoyed socializing with her many friends, particularly her “potluck group”.

She loved going on vacation with her family, whether it was a road trip
to Maryland, Nebraska, Texas or California to visit relatives, going to
museums in Chicago, camping at Yellowstone, or traveling to the family
cottage at Moose Lake, Wisconsin.

Betsey lived in Dubuque IA for 87 years altogether, including 20 years
after the death of her beloved husband. In 2013 she moved to Missouri to
live near son James and daughter-in-law Rose, and in 2016 she moved to
Arizona to live in the home of son Peter and daughter-in-law Diane. She
will be greatly missed by her family, friends, relatives, co-workers and
students, in all the places she has lived.

Memorials may be given to the Westminster Presbyterian Church choir.
Online condolences may be left for the family at
www.egelhofsiegertcasper.com