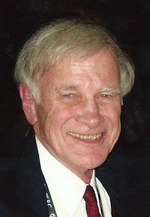 Francis J. Bechen, 84, of Dubuque passed away on Friday, August 23, 2019. Visitation will be from 3 p.m. to 7 p.m. on Wednesday at the Egelhof, Siegert and Casper Funeral Home and Crematory, 2659 Kennedy Road. Mass of Christian Burial will be held at 2 p.m. on Thursday at the Church of the Nativity with burial at the Mt. Calvary Cemetery immediately following.
Francis was born March 9, 1935 in Dubuque, Iowa, son of Frank and Crescentia (Wathier) Bechen.
He was a beloved school teacher for the DCSD for 30 years, teaching Spanish at both Dubuque Senior and Hempstead High Schools and then retiring in 1998.
Francis was a six-time Iowa Golden Gloves boxing champion and six-time Ringside World Masters Champion. He was also a boxing judge and referee for over 40 years. He was recently inducted into the National Golden Gloves Officials Hall of Fame and received the Outstanding Judge Award. Outside of the boxing world, he enjoyed watching football, bowling, skydiving, fitness and traveled extensively. He was also a loving and supportive father and grandfather, pilot and member of the EAA, former member of Optimist Club and devoted member of the Church of the Nativity.
Francis is survived by five children, Dan Bechen of Aurora, Illinois, Darci (Austin) Bechen Terry of Missouri City, Texas, Scott (Stephanie) Bechen of Dubuque, Jeremy (Kate) Bechen of Dubuque and Todd (Leslie) Bechen of Des Moines; and nine grandchildren.
He is also survived by four siblings, Richard Bechen of Dubuque, Robert Bechen of Dubuque, Zita (Larry) Elgin of Dubuque and Pauline (Harlow) Meyer of Dubuque.
He was preceded in death by his parents, a brother, Olin Bechen, a sister, Ruth Becker and a nephew, Greg Becker.
The family would like to send their special thanks to the boxing community, all his former students and dear friends who have brightened his life.