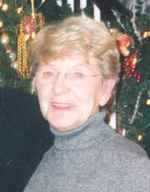 Genevieve M. Pierotti, 88, of 3460 Starlite Dr. passed away Saturday, July 27, 2019. Private family services will be held for the immediate family.
Gen was born on December 15, 1930 in Iowa City, Iowa, daughter of John and Delphine (Rummelhart) Colbert. She attended Iowa Business School and was employed at the University of Iowa Hospital.
She met Eugene L. Pierotti in Mason City, Iowa and they married at Holy Family Church. A coaching and teaching position for Gene at Wahlert High School brought them to Dubuque in 1964. He preceded her in death on December 24, 2015.
Gen most enjoyed being a homemaker and mother to her four kids and grandmother to her seven grandchildren and five great grandchildren. She also enjoyed working at Younkers Department Store when her kids were raised.
Together Gen and Gene enjoyed golfing and traveling, but mostly attending the many activities of their kids and grandkids.
Gen is survived by four children, Steve Pierotti of Dubuque and his children, Lauren and Nathan; Douglas Pierotti of Seattle, WA; David (Amy) Pierotti of Tomball, Texas; their children, Alicia (Brad) Munson and their childen, Brady, Kobe, Ellie, Presley and Louie; Tyler Pierotti and Ali (Paul) Schafer; and Elizabeth Pierotti Heiar of Dubuque and her children, Alex (Ashley) Heiar and Madeline Heiar.
She is also survived by her two brothers, Conrad (JoAnn) Colbert and Joe (Bobbie) Colbert and her sister, Mary Ellen (John) Keane.
Gen was also preceded in death by her parents brothers and sisters in law, Donald Colbert, Clayton and Marge Colbert, Ed and Dolly Colbert and David Colbert and a sister, Virginia Burgess.
Memorials may be given to Hospice of Dubuque.
The Pierotti family wishes to thank Dr. Joe Compton, his nurse Jody and the great care of the Finley Hospital. Also, the extraordinary care of Hospice of Dubuque, especially nurses, Allison, Katie and Heather and social worker Stephanie.