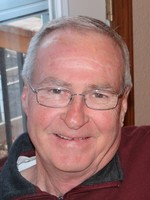 Mass of Christian Burial will be held at 10 a.m. Wednesday, August 7, at St. Anthony’s Catholic Church. Fr. Steven Rosonke will officiate. Burial will be in St. John the Baptist Cemetery, Centralia. Friends may call from 3 p.m. to 7 p.m. Tuesday, August 6, at Egelhof, Siegert & Casper Westview Funeral Home and Crematory, 2659 John F. Kennedy Road, where there will be a parish wake service, time to be announced.

He married Patricia A. “Pat” McAleer on June 21, 1969, in Monticello. Pat and Jerry enjoyed forty wonderful years of marriage prior to Pat’s death in 2009.

Jerry worked for Northwestern Bell and US West for 31 years, retiring in 1999. During his retirement, he was a courtesy driver for Anderson-Weber Toyota Lincoln.

He was a member at St. Anthony’s Catholic Church.

Jerry enjoyed watching the Iowa Hawkeyes, the Green Bay Packers, and NASCAR. During his retirement, he restored a 1952 John Deere Model A tractor similar to the one used on his childhood farm. He enjoyed driving his tractor each summer in the WMT Tractorcade. He also took annual fishing trips to Canada with friends from the Telephone Company. Jerry loved driving his Mustang to Ankeny to visit his grandchildren for their birthdays and holidays. He and Pat will be remembered for their hospitality and making their home a welcoming place for friends and family to relax and have fun.

He was preceded in death by his wife, Pat; his parents, Jay and Mary Burds; his oldest brother, Jack Burds; a sister-in-law, Joyce Curoe; and brother-in-laws, Bob Curoe, John Curoe, and Tom McAleer.

A Gerald Burds Memorial Fund has been established.