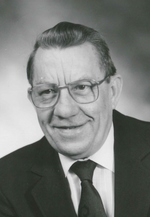 Mass of Christian Burial will be at 10 a.m. Thursday, October 3, at St. Patrick Catholic Church, 1425 Iowa St. Msgr. Thomas Toale will officiate. Interment will be in Linwood Cemetery, with military honors accorded by the American Legion Post #6. Friends may greet the family from 3 p.m. to 7 p.m. Wednesday, October 2, at Egelhof, Siegert & Casper Funeral Home and Crematory, 2659 John F. Kennedy Rd., where there will be a prayer service at 6:30 p.m.

Harvey was born March 8, 1928 in Dubuque, the son of Charles and Martha (Bergman) Avery. He attended school at Jackson, Washington Jr., and Dubuque Senior High. Harvey joined the U.S. Navy during WWII. During his time in the Navy, Harvey served on the aircraft carrier USS Philippine Sea, which was the flagship for Admiral Byrd’s High Jump expedition to the South Pole in 1947. Following his honorable discharge, he married Mary Heinz on November 26, 1949 at St. Mary Catholic Church, Dubuque.

He managed the Fischer Skelly Gas Station on 4th and Locust for 10 years, and went on to employment at John Deere Dubuque Works for 25 years, retiring in 1990. He was a member of the UAW #94 and the American Legion Post #6. Harvey was an avid bowler for over 50 years, and was a stalwart Green Bay Packer fan. He was a member of St. Patrick Catholic Church for 60 years, where he served as head usher. Harvey was COB Emeritus of the Avery Foundation, which was founded in 2017 to help cancer patients.

In lieu of flowers, memorials may be made to the Avery Foundation, www.averyfndtn.org.