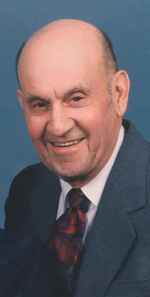 Herbert C. Bailey, 95, of Dubuque, died Wednesday, May 1, 2019 at Stonehill Care Center.
A visitation will be held from 10:00 – 11:30 a.m., Saturday, May 4 at the Egelhof, Siegert & Casper Westview Funeral Home and Crematory, 2659 JFK Road. Funeral services will be held at 11:30 a.m., Saturday at the funeral home, with Rev. Jonathan Crawford officiating. Military Honors will be conducted by the Dubuque Marine Corps League immediately following. Burial will be in Linwood.
Herbert was born on August 20, 1923 in Bellevue, Iowa the son of Charles and Beata (Tietjen) Bailey. He married Dorothy Masscey-Puls on September 28, 1963 in Dubuque. She preceded him in death on January 16, 2013.
During WWII he served our country in the United States Army. He was stationed in Africa, France and Germany.
Herbert was an accountant and treasurer for 40 years at Frank Hardy Advertising, retiring in 1989.
Herbert was a long time, active member of St. Paul Lutheran Church. He loved big band music, playing the piano, traveling and horseracing. He was an avid sportsman and as a young man enjoyed playing basketball, baseball, golf and softball.
He is survived by his step-son, Thomas C. Puls.
He was also preceded in death by his parents.
In lieu of flowers, cash memorials can be given to Area Residential Care or St. Paul Lutheran Church.
Special thank you to the ladies of Home Instead who made it possible for Herb to stay in his home until the last 2 months. Thank you then to the staff of Stonehill Care Center.