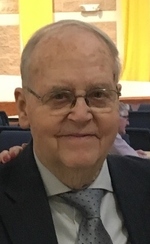 James “Jim” Jensen, 91, of Dubuque, passed away peacefully on Thursday, October 31, 2019 at Dubuque Specialty Care with family members by his side.

James was born July 10, 1928 in McGregor, Iowa, the son of Howard and Ina Gorkow Jensen. As a very young man, he learned the value of hard work and carried this with him always. His very first job at age 15 was working for the Milwaukee Road railway.
In 1946 he joined the Marines where he served proudly for two years in 2nd Division, 2nd Marines Infantry, Headquarters Company, Communications Platoon. He told many stories of his time serving his country, and was very proud to have learned various skills including working in communications and connecting telephone lines.

Before he enlisted, Jim’s heart was stolen by Lois Irene Kemper, and upon his return from the Marine Corps, they were wed on July 16, 1948, in Madison, WI. Lois preceded him in death on April 15, 2018.
Throughout his life, Jim worked at many trades. He started with the Bell Telephone Company where he was sarcastically nicknamed “Pole Climbin’ Marine.” for his swift ability to ascend poles. He also worked for Standard Oil Company, Falk Gear Co, General Electric, Fuller Brush, and John Deere before becoming a maintenance man at the Dubuque Packing Company. After his retirement from “The Pack,” he traveled to many different meat packing facilities to improve their conditions and became a Maintenance Engineer and Chief Engineer for Armour Swift-Eckrich, Beatrice Foods and Conagra.

Jim had a passion for reading and learning. During his life he continually took classes even into his retirement. He loved photography and was deemed the company photographer at many of the plants where he worked. He was an expert storyteller and would entertain everyone with his humorous and dramatic yarns.
In retirement, he became very involved in the Dubuque American Legion Post 6. He attended over 200 funerals of veterans in the Dubuque area. He was extremely active at Grand View Methodist Church where he served on the grounds keeping team, was part of the Board of Trustees, taught Sunday school and marriage classes, and enjoyed Men’s coffee each week.

In addition to his wife, Jim was preceded in death by his parents; his son Donald Jensen; and his brother, Leo “Bud” Jensen.

Visitation will be from 9:30 a.m. to 10:45 a.m. on Friday, November 8, 2019 at Grand View United Methodist Church located at 3342 John Wesley Drive in Dubuque, IA, where a funeral service will be held at 11:00 a.m. on Friday. Rev. Tom Shinkle will officiate. Burial will be in Hillside Cemetery, Lancaster, WI. A luncheon will be served immediately after the burial service at the Lancaster Country Club.