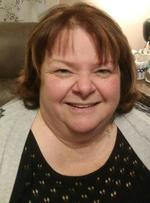 Kelli L. Howes, 60, of Dubuque passed away Tuesday, April 9, 2019 at Unity Point Health-Finley Hospital. Visitation will be from 4 to 7 pm Friday at the Egelhof, Siegert and Casper Westview Funeral Home and Crematory, 2659 Kennedy Road. Funeral service will be 11 a.m. Saturday at St. Paul Lutheran Church where visitation will also be held Saturday from 9:45 to 10:45 a.m.
Kelli was born January 18, 1959 in Guttenberg, Iowa, daughter of James and Cheryl (Brandenburg) Eberhard.
She graduated from Hempstead High School in 1977 and on September 24, 1977 she married the love of her life, Michael Howes at St. Paul Lutheran Church.
Kelli worked at Heritage Manor/Hawkeye Care Center for 40 years. She started out as a Med Aid, then realized it was her passion and became an Activities Coordinator. She was very involved with the Memory Care aspects of her job and recently became the Director of the Memory Care Assisted Living Unit at Hawkeye Care. She loved each and everyone of her residents making sure their well being was first. She was still making sure everything was fine with her “peeps” when she was in ICU Monday.
Kelli and Mike had a love for the outdoors that they share with their daughters. They would camp every chance they could when they were younger. Kelli’s favorite place in the world was Yellow River State Forest. Kelli was a Girl Scout when she was younger and became a leader for her daughters. She wanted to make sure her girls could outshine any Boy Scout like she could. Kelli would tell her daughters stories about when she was younger and she would go hunting and fishing with her Dad.
Kelli also shared her love for music with her husband Mike. She was always singing around the house, at work with her residents or with her daughters. She was also Mike’s biggest fan whenever his many bands played around the Tri-States.
Kelli loved fiercely. Her family always came first. She was so proud of her grandchildren. Kaitlyn with her grades and music and Charlie with his sports. She had such a big heart that she shared with so many. She would give the shirt off her back to help someone in need. She was truly a hidden gem. She will be missed more than any words can truly express.
She is survived by her husband of 41 years, Michael Howes of Dubuque; one daughter, Nicole (Jay) Kress of Balltown; two grandchildren, Kaitlyn and Charlie Kress; Parents, father, James Eberhard of Dubuque and Cheryl Kramer of Vinton; and two sisters, Kris (Greg) Schadle of Keystone, Iowa and Kerri (Terry) Benda of Urbana, Iowa; sister in laws Deb (Ron) Posey, and Becky Clark; brothers in law Ron Howes and Don (Lisa) Howes.
She was preceded in death by a daughter, Katrina “Katie” Howes, two nephews Thad Howes and William Howes, and in laws, Gertrude and Harold Howes.
Mike and Nicole would like the thank Dr Khan, Paramount Ambulance Team, Unity Point ER Team and the compassionate Unity Point ICU Team.
In Lieu of flowers, a Kelli Howes Fund will be set up to help Mike with the medical expenses.