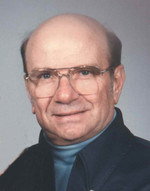 Marvin was born to John and Angeline (Broessel) Leslein on May 29, 1927 in Dubuque County. He married Marilyn Kerth on January 4, 1947 at Immanuel Church in Dubuque, and she preceded him in death on February 17, 2015.

He was employed at John Deere Dubuque Works as a Mechanic/Inspector for 38 years. He was known to be a practical joker, always laughing with his many friends. He was an avid collector of old-time radios, and spent much time recording old shows on reel to reel tapes.

He also enjoyed hunting and fishing, and researching his ancestry. After retirement you would find him in his motorhome with Marilyn during which time they would go antiquing for cookie jars (for Marilyn) and radios (for his own collection).

Marvin was the best husband, father, grandfather and brother that anyone could ask for and will be greatly missed.

Surviving are two of his children, Cynthia Leslein, of Dubuque, and Randall Leslein of Rice Lake, WI; his grandchildren, Brooke (Todd) Gassman and Justin Leslein; and three great-grandchildren.

In addition to his wife, Marvin was proceeded in death by his parents; his son, David Leslein; his twin brother Melvin (Carmen) Leslein; and his brother Eldon (Virginia) Leslein.