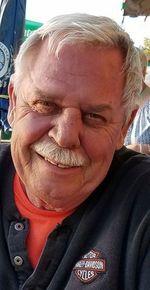 Michael D. Johnson, 69, of Lakeland, FL, formerly of Dubuque, died Sunday, June 16, 2019. A memorial service will be held at 7 pm Thursday at the Egelhof, Siegert and Casper Westview Funeral Home and Crematory, 2659 Kennedy Road where visitation will be held Thursday from 4 pm until time of service.
Michael was born July 10, 1949 in Luanna, Iowa, son of Marland “Bud” and Lorraine (Berg) Johnson. He was a graduate of MFL High School.
On July 26, 1986 he married Linda Ford in Rock Island, IL.
The early years of his life were spent in Northeast Iowa working on the farm. He went on to own and run a construction company, wheel and deal in the car business, and manage properties in Florida. He was a man of many talents that included driving a school bus and bartending.
Michael enjoyed riding his motorcycle, playing pool and euchre, and watching the Cubs and Bears. He spent time traveling, leaf looking, mushroom hunting, taking Sunday drives and most of all being with his kids and grandkids. Anyone that was lucky enough to know him, was blessed by his friendship and generosity. He left a lasting impression that many will never forget. His many sayings included “that dog don’t hunt” and “hey muchacho”. He always greeted everyone with a firm handshake or a heartfelt hug.
He is survived by his wife, Linda Johnson of Lakeland, FL; children, Pam (Tony) Grover of Iowa City, Brett Johnson of Mt. Pleasant, IA, Donny Hansen of Dubuque and Heather (John) Krow of Dubuque; grandchildren, Josh Krow of Stronghurst, IL, Janae (Connor Schmitt) Krow of Davenport, IA, Jared and Jack Krow, of Dubuque and Zachary Sedrel of Cedar Rapids, IA; and a great granddaughter, Emmy Sedrel, of Cedar Rapids, IA.
He is also survived by his siblings, John (Linda) Johnson, Eugene Johnson, Russ (Shelia) Johnson and Bonnie Lewis.
He was preceded in death by his parents.
Ride safe Big Dog Daddy Maka Waka Man, until we meet again!
A Michael Johnson Memorial Fund has been established.