To share your memory on the wall of Milton Boyes, sign in using one of the following options:

To send flowers to the family or plant a tree in memory of Milton A "Hunsie" Boyes, please visit our Heartfelt Sympathies Store.

We encourage you to share your most beloved memories of Milton here, so that the family and other loved ones can always see it. You can upload cherished photographs, or share your favorite stories, and can even comment on those shared by others.

Cathy Gretlein and Much Love, Doni & Lou have sent flowers to the family of Milton A "Hunsie" Boyes.
Show you care by sending flowers

Posted Dec 13, 2019 at 12:29am
WE AT WINGER CONST CO ARE VERY SADDENED BY THE NEWS OF MILTS PASSING . WE WOULD LIKE TO LET THE FAMILY KNOW HOW MUCH WE WILL MISS HIS QUICK WIT AND HUMOR I ENJOYED OUR CONVERSATIONS . HE WAS A GOOD NEIHBOR GOD BLESS HIM ON HIS JOURNEY . MIKE WINGER AND FAMILY
Comment Share
Share via:
ER

Posted Dec 12, 2019 at 06:23pm
I use to go everywhere with my dad. For hours we would look at vehicles, motorcycles, etc. I would help him with his rental properties. I have so many memories of him and they were all good memories. He use to joke and tell people the reason I was always with him is because I was to ugly to kiss good-bye. He was my idol. I don’t know what life will be like without him because he was such a big part of mine. I am so grateful to have had my dad for 55 years. I will miss him every second of every day for the rest of my life. His loving daughter, Elizabeth
Comment Share
Share via:
MW

I am so sorry for your loss. Michelle Walter(friend of Wendy’s)
DB

(((Hugs))) Liz. So very sorry to hear about the passing of your Dad. Always enjoyed talking with him... Doug Bishop
CG

Posted Dec 12, 2019 at 11:39am
John and I would like to express out deepest sympathy. All of you are in our prayers. Milt was the absolute best!! Such a loving & giving person.

Posted Dec 11, 2019 at 05:47pm
Uncle Hunsie will remain in our hearts forever. I wish we could be with you in person, but we'll be with you in prayer and thought. Always.

Much Love, Doni & Lou purchased flowers and planted a memorial tree for the family of Milton Boyes. Send Flowers 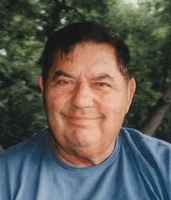