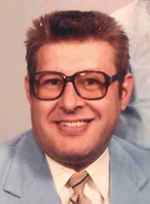 Paul F. Holz, 71, of Dubuque passed away Friday, August 23, 2019, after a brief illness. Visitation will be from 4 to 7 pm Tuesday, August 27 at the Egelhof, Siegert and Casper Funeral Home and Crematory, 2659 Kennedy Road where there will be a parish wake service at 6:30 pm. Mass of Christian Burial will be 10 a.m. Wednesday August 28 at St. Raphael’s Cathedral with burial in Mt. Calvary Cemetery.

Paul was born February 25, 1948 in Dubuque, son of Louis M. and Kathryn M. (Zahina) Holz. He attended St. Columbkille’s grade school and Dubuque Senior High School. He was employed at the Hoffmann Industrial Development Center for over 30 years.
Paul enjoyed watching old black and white movies & shows; his favorites being the Charlie Chan, Lone Ranger and “The Shadow” mysteries. He also liked taking the Jule bus to Hy-Vee and the Kennedy mall, and walking to Eagle Point and AY McDonald Park. He loved the fireworks shows on the Fourth of July making it to 3 or 4 of them each year as well as taking vacations to Tennessee to visit nieces & nephews. In his spare time, he also liked to read paperback novels and had a large collection of them, some of which he re-read a number of times. He listened to music from his record collection which included Lawrence Welk & the Oak Ridge Boys.

He was preceded in death by his parents and his grandparents, Frank and Josephine Zahina & Louis F. and Edna Holz.

Memorials may be made to the American Cancer Society.

The family would like to thank the doctors, nurses and staff at Medical Associates and Mercy Hospital, Dubuque Specialty Care, and Hospice of Dubuque for Paul’s care during his illness.