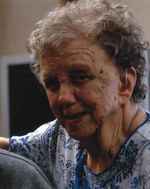 Phyllis M. Hutter, 78, of Dubuque died Friday, May 24, 2019 at Manor Care. Mass of Christian Burial will be 10:30 a.m. Wednesday at the Church of the Nativity where visitation will be held Wednesday from 9:30 to 10:15 a.m. Burial will be in St. Joseph Cemetery, Bellevue, Iowa.
Phyllis was born October 25, 1940 in Key West, Iowa, daughter of Earl and Sylvia (Frantzen) Berendes Sr.
On May 27, 1972 she married the love of her life, Dave Hutter, at St. Joseph Catholic Church, Bellevue. He preceded her in death on February 7, 2012.
Phyllis worked in environmental services at Mercy Medical Center for 35 years, retiring in 2004.
Phyllis had a very special relationship with her nieces and nephews, treating them as if they were her own children.
She is survived by a brother, Mel (Marilyn) Berendes of Dubuque; a sister, Anita (Eldon) Rowan of
Coeur D’ Alene, Idaho; and many nephews and nieces.
She was also preceded in death by her parents, brother and sister in law, Earl and Ruth Berendes; brother, Loras Berendes; nephew, Bill Berendes and niece, Kristi Berendes.
The Egelhof, Siegert and Casper Westview Funeral Home and Crematory is in charge of arrangements.
A Phyllis Hutter memorial fund has been established.
The family would like to thank the staff at Manor Care for their many years of care, and Hospice of Dubuque.