To share your memory on the wall of Red Sabers, sign in using one of the following options:

To plant a memorial tree in honor of Red Sabers, please visit our Heartfelt Sympathies Store.

Receive notifications about information and event scheduling for Red

There are no events scheduled. You can still show your support by sending flowers directly to the family, or planting a memorial tree in memory of Red Sabers.
Plant a Tree

We encourage you to share your most beloved memories of Red here, so that the family and other loved ones can always see it. You can upload cherished photographs, or share your favorite stories, and can even comment on those shared by others.

Posted May 05, 2020 at 05:22pm
Remember all the fun, music, and dancing at the Legion, loved talking to Red about his tomatoes, and looked forward to them every year, loved his teasing and funny wit, love to the family
Comment Share
Share via:
JT

Posted May 05, 2020 at 02:08pm
Our hearts go out to the whole Sabers gang, you are in our thoughts and prayers. I always loved the "verbal sparring" we would engage in, he could take it as well as give it!
Comment Share
Share via:
DH

Posted May 04, 2020 at 03:00pm
So many great memories from our Y days with Red. His home grown tomatoes,that great sense of humor,he loved being around people.Red truly was a tough guy who feared nothing.To Reds family what a great tribute to a great man.

Posted May 04, 2020 at 12:20pm
I'm sorry to hear about Red's passing. I always remember that Red was tough. I used to kid around with him when I'd see him at the Y back in my college weightlifting days. He always would tell me that he could "take me", and even though I disputed it with him, I'm glad that he never called me to the ring on that because I'm pretty sure he would have. He lived a great life. I will continue to pray for Red's and Rosie's souls in my regular Divine Mercy Chaplet prayers. May God Bless you all.
Comment Share
Share via:
MS

Posted May 04, 2020 at 10:42am
Renee and Saber's family , Jack and I send our deepest condolences on the passing of your Dad. Your mother,Rosie and my mother (Marge Kluck) went to I.C. together and remained friends their entire lives. They would play cards and I remember being at your home on West 5th and your Dad would make us laugh! May he rest in peace. Mary and Jack Schumacher
Comment Share
Share via: 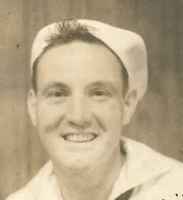