To share your memory on the wall of Rev. Dr. Henry Fawcett, sign in using one of the following options:

Provide comfort for the family of Rev. Dr. Henry Fawcett with a meaningful gesture of sympathy.

Henry Fawcett, age 86, died peacefully on May 11, 2019, at Bethany Home in
Dubuque where he resided for the past two years. A reception for family and friends will be held at 6:00 p.m. on Monday, Jun... Read More
The Rev. Dr. Henry Eli Fawcett

Henry Fawcett, age 86, died peacefully on May 11, 2019, at Bethany Home in
Dubuque where he resided for the past two years. A reception for family and friends will be held at 6:00 p.m. on Monday, June 10, at the Heritage Center,
University of Dubuque. On Tuesday, June 11, a Witness to the Resurrection service will be held at 11:00 a.m. at First Presbyterian Church, Dubuque.

Henry Fawcett of the Tsimshian tribe, was born in Metlakatla, Alaska, on June 24, 1932. He grew up in the Presbyterian Church there and at age 13, felt
called to ministry. He is a graduate of Sheldon Jackson College in Sitka, Alaska, and also served on their staff and later as a trustee. He married VeNita Ellen Peterson of Kent, Washington, on November 23, 1956. He was a part-time commercial fisherman until one of his own sermons convicted him to become a pastor full-time. He was ordained by the Presbytery of Alaska on July 2, 1963.

Henry was known for his sense of humor, his gift for "encouraging" people to seek their highest calling, and his willingness to have hard conversations when they needed to be had. He was grateful to be a pastor in Alaska, Nebraska,
Minnesota, and Washington state where he also had a street ministry and special contacts with Native Americans.

He served at the University of Dubuque Theological Seminary in Dubuque, Iowa, from 1986 through 2003. He was called to "be himself" as the Pastor to Students with an emphasis on the training of the heart. He was also the Director of the Native American Program at the seminary. After retiring in 2003, Henry served in several capacities until 2016.

Throughout those years, he joined Cecil Corbett and Ralph Scissons as one of the "Three Musketeers" who advocated for the rights of Alaska Natives and Native American peoples. They worked with the Native American Consulting Committee, and were also involved at Charles Cook Theological School in Tempe, Arizona. They emphasized the work of lay people and the bringing of theological education to those unable to attend seminary.

Henry was on the Presbyterian Brief Statement of Faith Committee where he suggested the line about "hearing the voices of peoples long silenced."

He received two Doctor of Divinity degrees, one from Buena Vista College, Storm Lake, Iowa, and the other from the University of Dubuque Theological Seminary.

Henry felt that funerals are an opportunity to share the resurrection when people are most receptive. He loved to sing, often leading groups in the singing of the Lord's prayer, a Cappella. He enjoyed spending time with children and youth, and was honored to have nine namesakes named Henry or Eli.

Henry and VeNita, his wife of 62 years, had no biological children, but they were delighted with their extended family which includes many who call him Dad, Grandpa, Uncle, Mentor, and Friend.

He was preceded in death by his mother (Helen Bush), his father (Henry Fawcett), his uncle and aunt who raised him, ( Elijah and Louisa Fawcett), his eight siblings, three nephews, and one niece.

We wish to thank the staff at Bethany and the Hospice group who went the second mile to care for Henry. In lieu of flowers, memorials may be given to the University of Dubuque Student Scholarship Fund #1342.
Read Less

We encourage you to share your most beloved memories of Rev. Dr. Henry here, so that the family and other loved ones can always see it. You can upload cherished photographs, or share your favorite stories, and can even comment on those shared by others.

Posted Jun 23, 2019 at 09:31am
I was saddened to learn of Henry's recent passing. I knew him briefly, but the time I knew him I cherish. I had "Dr. Fawcett" as my faculty mentor in 1995 or 1996. I was at that time, a young pastor, facing challenges within and without, most of which I did not understand. I know I felt myself lost and alone. Each week, however, when I met with Henry, he affirmed my call, and most importantly for me at that time, ... being barely thirty ... he affirmed me. He conveyed to me the mercy of the God I had been called to serve. He did not admonish me, fragile as I was in my confidence, but treated me with the worth that was already mine in Christ. His sense of humor, his joy, and his strength, he shared with me. Through him, I would begin to enjoy what I already had in Christ. When I think of the gifts God has nurtured in me, and the capacity I now enjoy as a seasoned pastor, to do for others what Henry did for me, I find myself grateful for the time I spent with Henry. I have shared what I am sharing here with many many others over the years. Henry was an amazing man of God, and his impact on my journey, my life, and ministry continues to this day. Praise God for Henry Fawcett!
Comment Share
Share via:
JG

Posted Jun 08, 2019 at 06:05am
Henry came to Hoonah one year. We were having a koo-eex, a memorial footpath for our brother, Lenny. Leonard Ralph Gray. He was there for the church. Our sister Cathy and her husband, Don Bolton, are members of the church in Hoonah. He told Cathy and Don he wanted to come to meet us. My sister Lisa, our Mom, Lucille Dundas, and I were busy working on projects to distribute at the pay off party. ( koo-eex, memorial potlatch) He walked in and looked at us being busy. He was introduced to us. He looked at us each. Pointed at me, I know who you look like. Pointed at Cathy, I know who you look like. Pointed at my Sister Lisa. Not sure who you look like. Made us laugh and tease our sister a bit. When we were done, he pointed at Lisa again, now I know!! Like your great grandmother! You laugh like her too! He spoke to us for a bit. Then he had to go. He was leaving Hoonah. We had asked him to attend the pay off party as an honored guest. Unfortunately his plans for heading home could not be changed. Just meeting him that one time, I remember him with great respect, love and a smile. My condolences to his family and friends.
Comment Share
Share via:
KW

Posted May 22, 2019 at 12:39pm
There was no one like Henry Fawcett. When he was the pastor in a neighboring town, he became a good friend to our family. I have many happy and grateful memories.
Comment Share
Share via:
RC

Posted May 15, 2019 at 01:38pm
I have the fondest memories of Dr. Fawcett and his tremendous sense of kindness and humor. An embodied example of Christian grace and love, Henry shared his humanity with an open heart, a kind and inviting wisdom, and a smile that would always warm your heart. It was an interesting thing that I mentioned him this very day as one who had always jokingly addressed me as "Rev. Dr. C. Dale St. Clair"--maybe in jest, maybe in encouragement, maybe in always being the kind of person who was looking at not only what was, but what was possible. He was the kind of person you'd be fortunate to be like. Love and good journey, Rev. Dr. H. Eli Fawcett.
Comment Share
Share via: 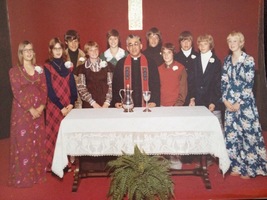 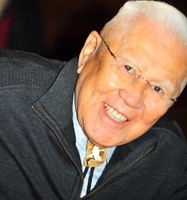 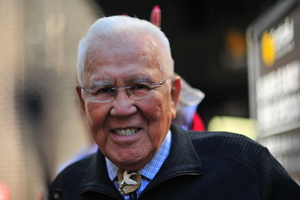