To share your memory on the wall of Rev. Jerry Chase, sign in using one of the following options:

Provide comfort for the family by sending flowers or planting a tree in memory of Rev. Jerry Chase

Provide comfort for the family by sending flowers or planting a tree in memory of Rev. Jerry Chase

Print
Rev. Jerry Chase went to be with his Lord on Wednesday, February 5, 2020.

A celebration of life will be held at 11:30 am., on Saturday, March 7, 2020 at the Egelhof, Siegert & Casper Funeral Home and Crematory, 2659 JFK Road in Dubuque. Rev. Linda Hauschild will officiate. Friends may call from 10 am until the time of services. Burial will be in Cascade Protestant Cemetery later in the day.

Jerry was born on February 20, 1950 in Monticello,Iowa, the third son of Leonard Chase, Sr. and Hazel (Macomber) Chase. He grew up in Calamus, Iowa until his family moved to Dubuque in 1962. Jerry graduated from Dubuque Senior High School in 1968.While in high school, Jerry became a founding member of the Colt .45 Drum and Bugle Corps, now known as The Colts Drum and Bugle Corps. When he was not playing the bass drum, he was volunteering for the organization. He had an abiding love and passion for the activity.

In 1988 Jerry completed the Licensed Local Pastor School at the University of Dubuque Theological Seminary. He began his college education at Northeast Iowa Community College and graduated with a Bachelor’s degree in Religious Studies from the University of Dubuque in 2002. He went onto receive his Master of Divinity degree from UDTS in 2005.While attending seminary Jerry served as student pastor at Trinity United Methodist Church in Hazleton, Iowa and Grace United Methodist Church in Oelwein, Iowa. He was ordained at the First Congregational Church in Elkader, Iowa in 2006 and served there until his retirement.

Jerry was preceded in death by his parents; brothers,Jim and Jan Chase and their wives; and brothers-in law, Richard Schwein and Bob Simpson.

Memorials may be directed to the Colts Drum and Bugle Corps.
Read Less

To send flowers to the family or plant a tree in memory of Rev. Jerry E Chase, please visit our Heartfelt Sympathies Store.

Receive notifications about information and event scheduling for Rev. Jerry

We encourage you to share your most beloved memories of Rev. Jerry here, so that the family and other loved ones can always see it. You can upload cherished photographs, or share your favorite stories, and can even comment on those shared by others.

Earl and Sue Sawvel sent flowers to the family of Rev. Jerry E Chase.
Show you care by sending flowers

Earl and Sue Sawvel purchased flowers and planted a memorial tree for the family of Rev. Jerry Chase. Send Flowers

Flowers were purchased for the family of Rev. Jerry Chase. Send Flowers

Posted Feb 16, 2020 at 06:25pm
Jerry was a great Christian man. In the Colts I was blessed to guard the big drummers and try to keep them in line while they focused on keeping us on beat. There were many hot, very hot days when we would have a parade and then a show. I can honestly say I do not remember Jerry complaining. It was a Blessing when I saw he was the bus driver taking my daughter to school at TriState Christian school in Galena. I remember the first day the bus door opening and that smiling face saying “Hi Diane, I will be taking good care of your daughter. I will miss the smile, but I know the Lord has other plans for Jerry.
Comment Share
Share via:
RA

Posted Feb 13, 2020 at 02:36pm
I went to Seminary with Jerry, and we did our CPE training together. God used our similar sense of humor to provide a special bond between us that summer to help each other grow. (Although the others in the group may not have always appreciated our humor as much as we did !) I am confident Jerry has received God's honor of fulfilling 2 Timothy 2:15 "Study to show yourself approved unto god, a worker who needs not to be ashamed, rightly discerning the word of truth." God's peace be with Jerry's family and friends.
Comment Share
Share via:

Posted Feb 08, 2020 at 05:15pm
I can certainly share a memory of Jerry. Wow what a great person, what a great man, and I’m sure he had to been a great minister. This memory goes back to the drum and bugle corps days with the legionnaires, or Colts. It was early on with my membership in the organization, and we are returning from our weekend adventure competing in a few towns around the area. I had an awful good ear ache happening on our way home on the bus ride. You know, going from hot and sweaty outside to cold inside and riding those buses. I was quite uncomfortable, but I was sitting next to Jerry on the way home and he did comfort me. I was able to rest my head on his shoulder as I tried to get some sleep until I was able to get home where my parents would help me. That was probably my first close encounter with Jerry. I did have other encounters as we would sit next to one another watching the annual summer drum and bugle corps show at Dalzel field. We would share opinions,
and you know Jerry would always be a very gracious person when evaluating each corps performance.
Gary Strohmeyer
Comment Share
Share via: 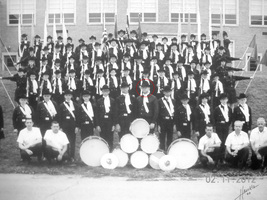