To share your memory on the wall of Ricky Coble, sign in using one of the following options:

Provide comfort for the family of Ricky Coble with a meaningful gesture of sympathy.

Ricky was born March 5, 1963 in Ottumwa, the son of Walter “Dick” and Margaret (Hutton) Coble. He graduated from Hempstead High School. Ricky was employed at Old Navy for 10 years, Goodwill, and McDonald’s. He enjoyed travelling all over, and especially enjoyed spending time in Arizona. Ricky was also a fan of country music.

The family would like to thank the staff at Manor Care, especially the rehab center.

Memorials may be made to the Ricky Lee Coble Memorial Fund.
Read Less

We encourage you to share your most beloved memories of Ricky here, so that the family and other loved ones can always see it. You can upload cherished photographs, or share your favorite stories, and can even comment on those shared by others.

Posted Nov 19, 2019 at 10:55pm
Mr and Mrs Coble. I just learned late that Ricky passed away. I was the last nurse to take care of Ricky at Goodwill. I loved him so much. We had a fun time together. One time we were getting out of the car on Iowa St to go to the VNA and Ricky threw his water bottle on the ground by my car and I yelled, “ Ricky did u just litter? Pick that up!” Ricky started to laugh and the people across the street started to laugh too! On his last TriState Tour bus trip he didn't have a good time and I always felt bad cause I helped organize that trip. But we had a lot of fun shopping for summer clothes to take on the trip. So sorry for ur loss. He had a lot of personality and helped brighten a lot of people’s days!
Comment Share
Share via: 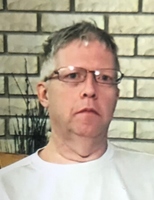