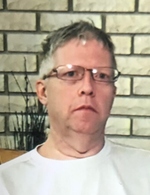 Ricky was born March 5, 1963 in Ottumwa, the son of Walter “Dick” and Margaret (Hutton) Coble. He graduated from Hempstead High School. Ricky was employed at Old Navy for 10 years, Goodwill, and McDonald’s. He enjoyed travelling all over, and especially enjoyed spending time in Arizona. Ricky was also a fan of country music.

The family would like to thank the staff at Manor Care, especially the rehab center.

Memorials may be made to the Ricky Lee Coble Memorial Fund.