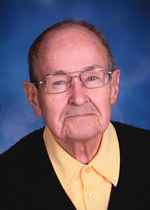 Robert M. Mosby Sr., 95, passed away at his home, surrounded by his loving family on Friday, March 1, 2019.
Mass of Christian Burial will be at 11 am, on Tuesday, March 5 at St. Anthony’s Catholic Church, with Rev. Steven Rosonke officiating. Entombment, with Military Honors will be held at Linwood Cemetery at a later date. A visitation will be held from 9- 11 am, Tuesday at the church. The Egelhof, Siegert & Casper Westview Funeral Home and Crematory, 2659 JFK Road is in charge of the arrangements.
Robert was born on the family farm in Rensselaer, Indiana, the son of Arthur and Violet (Davisson) Mosby. There he learned the value of hard work and perseverance, which he carried with him throughout his life. Serving as Navy Pilot at the end of WWII and as an engineer at NL Industries, and later the Chicago - Dubuque Foundry. On February 25, 1961 he married Joan Morin in Chicago. She preceded him in death on June 25, 2012.
He is survived by his son, Robert (Sheryl) Mosby Jr.; daughters, Noreen (Bill) Tyler and Karen (Mike) Cintron; sons-in-law, Bill Pugel and Joe Brucato; brother, Bill MacNider; his companion, Donna Herrig; grandchildren; great-grandchildren; and many nieces and nephews.
He was also preceded in death by his daughters, Robin Pugel and Wrennie Brucato; and his brother, Don (Pat) Mosby.
Memorials may be given to Hospice of Dubuque or St. Anthony’s Catholic Church.
Special thank you to Hospice of Dubuque for all of their compassionate care.