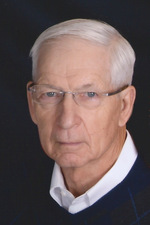 Roger J. Meyer, age 80, of Dubuque, Iowa, passed away peacefully on December 10, 2020, at Luther Manor, after a long struggle with Alzheimer’s.

Roger was born January 2, 1940, in Dubuque, son of Clarence F. and Bernice V. (Stoffel) Meyer. He grew up on the family farm in Balltown, Iowa. His family, faith and baseball were large parts of his life. His favorite past-time growing up was playing baseball with his brother Bob and the Sigwarth boys, with his sister Betty (Kress) usually nearby. His autobiography details early memories of driving tractors, listing who won the World Series and going down to Waupeton to wait for the train so he could bring home the Sunday morning paper.

One of the ‘Buenie’ Brimeyer girls, (Mary Lou), introduced herself to Roger in June of 1959. They had their first date a few months later, their second in June of the following year and were engaged in early 1961. He wrote in his autobiography:,“she would become the love of my life”. They married on September 23, 1961, and they celebrated 59 years of marriage this year.

Roger, a devoted husband, father, uncle, friend and baseball coach, positively influenced the lives of many around him. We are heartbroken that he is gone, but we are relieved to know that he is in a better place looking over us.

Roger was a long-time member of St. Anthony’s Parish in Dubuque. He retired from John Deere after 31 years of faithful service. He then spent his time watching his beloved Chicago Cubs, providing landscaping services, and delivering flowers for HyVee. He greatly enjoyed all of these activities and the people he met. He also cherished visits to see his family and trips to Branson.

Left to cherish his memory are his wife, Mary Lou (Brimeyer) and children John (Jennifer) Meyer of Omaha, NE and Tony Meyer of Cedar Falls, IA; grandchildren Hailey, Lydia, Jackson and Alison Meyer. Roger is also survived by his brother, Robert ‘Bob’ (Ruth), sister Betty (Leo) Kress and many nieces and nephews. Roger was preceded in death by his parents and by his loving daughter, Anne Marie Meyer (1993).

A private family burial service was held at Mount Calvary Cemetery with Sr. Margaret Anne Kramer officiating.
Due to the COVID pandemic, a celebration of life for family and friends will be held at a later date, when people can safely gather. Memorials may be directed to the family and will be distributed among Roger’s favorite charities.

The family would like to thank the staff in the memory care unit at Luther Manor and Hospice of Dubuque for their gentle care.