Obituary for Sharon A Cate 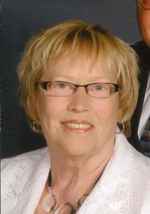 Sharon A. Cate, 74, of Asbury, passed away on Saturday, March 21, 2020 following a sudden illness while at her home in Mesa, Arizona.

In keeping with recent restrictions on social gatherings, funeral services and a Celebration of Her Life will be announced in the upcoming weeks.

Sharon was born on May 30th, 1945 in Dubuque to William and Dolores (Crimmins) Hendricks. She grew up in Dubuque and graduated from Wahlert High School in 1963. She married her high school sweetheart, Robert Cate, on March 21, 1964; and died while holding his hand on their 56th wedding anniversary. Her heart was always in Dubuque where she loved to spend time with her sisters and friends. But a piece of it belonged to Arizona, as well, where she enjoyed her annual “five month vacation” with Bob at their home in Mesa. She was forever grateful for the life she shared with Bob and frequently said they were having the best time of their lives over the last several years.

Sharon’s greatest treasure in life was spending time with her family. She could not have been more proud of the accomplishments of her children and grandchildren. Her faith was a pillar in her life and she was a longtime member of the Church of the Resurrection in Dubuque. Sharon was an avid card player who could often be found at a table with good friends playing Euchre or Hand and Foot. She spent much of her time reflecting and meditating in her gardens and loved to plant flowers that attracted butterflies. Her Wednesdays were reserved for Los Aztecas where she regularly met up with her lifelong friends for lunch; and usually stayed to reminisce about good memories over margaritas until dinner time.

Sharon was preceded in death by her parents; her father and mother-in-law, Mason and Florine (Roussel) Cate; her daughter, Danielle Cate; two brothers, Don Hendricks and Terry Hendricks; her brother and sister-in-law Ronald and Mary Cate; her sister and brother-in-law Nancy and Rollin Duensing; three nephews, David Hendricks, Chris Young, and Terry Hunt; and a niece, Anna Weitz.

In lieu of flowers, please consider a donation to either Resources Unite of Dubuque or Earth Angels of Dubuque. Sharon felt strongly about both of their missions to help others in our community in times of need.