To share your memory on the wall of Bernard Dansart, sign in using one of the following options:

To send flowers to the family or plant a tree in memory of Bernard R Dansart, please visit our Heartfelt Sympathies Store.

We encourage you to share your most beloved memories of Bernard here, so that the family and other loved ones can always see it. You can upload cherished photographs, or share your favorite stories, and can even comment on those shared by others.

Posted Sep 17, 2019 at 11:25am
My deepest sympathy to Marilyn and the whole family. I'm sorry that I wasn't able to be there for Bernie's funeral. I remembered him at the Eucharist, and all of you are in my thoughts and prayers.
Fr. Jim Bergin, SVD
Comment Share
Share via:
B

Posted Sep 16, 2019 at 10:11pm
Bernie and I were sponsors of the same honorary education fraternity, his on the Loras College campus and mine on the University of Dubuque campus. We cooperated in presenting the best prospective educators. His gentle ways and smile will be missed by many.
Frank P Belcastro

Posted Sep 16, 2019 at 08:26pm
Peace to all. I have but 1 memory of meeting Bernie, but it was a lasting peaceful encounter. When I was to Loras College in the early 1980's for their education program I was scared and felt lost. He was one of the counselors that helped get me on my feet and brought some calm and reassurance to make me feel I belonged. It is striking to think of how one small encounter can accomplish so much.

I later met a fellow student, Jack Wagner, who said Bernie was his uncle. When I told him of the influence his uncle had, he concurred that his uncle was always such a fine man.

I had forgotten much of this, but when they prayed for Bernie at Resurrection Parish this past Saturday I recalled all this.

My best to all his family.

Posted Sep 15, 2019 at 06:16pm
My sincere condolences to the Dansart family at this time of pain and loss! Please rest assured of my prayers and those of the entire Divine Word College community for the repose of Bernard's soul, and may you take comfort in knowing that he now shares fully in Christ's resurrection!
Comment Share
Share via: 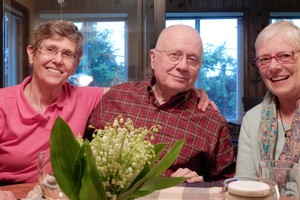