To share your memory on the wall of James Powers, sign in using one of the following options:

Provide comfort for the family of James Powers with a meaningful gesture of sympathy.

Print
James “Jim” K. Powers,88, of Dubuque entered into his eternal home on Sunday, June 9, 2019 at Manor Care Health Services, Dubuque.
Mass of Christian Burial will be 10:30 a.m., Thursday, June 13 at Resurrection Catholic Church, where a visit... Read More
James “Jim” K. Powers,88, of Dubuque entered into his eternal home on Sunday, June 9, 2019 at Manor Care Health Services, Dubuque.
Mass of Christian Burial will be 10:30 a.m., Thursday, June 13 at Resurrection Catholic Church, where a visitation will be held from 9:30 a.m.- 10:15 a.m. Burial will be in Mt. Calvary Cemetery with full Military Honors conducted by the Dubuque Marine Corps League.
Jim “Red” was born on August 21, 1930 in McGregor, Iowa the son of William and Lucille Powers. He proudly served on the front lines in the Korean War and was honorably discharged on February 16, 1953. Upon returning to the states he married Anna Mae (Reiter) in 1955 in Omaha, NE. Together they made their path through life sharing 61 years of the peaks and valleys of marriage and lived in the same home throughout their married life. Jim and Anna Mae were long time members of Resurrection Church and Jim was blessed one year to be the lucky winner of a vehicle at the Annual Resurrection Parish Festival.
Jim entered the work force first working at the former Caradco before becoming employed at John Deere Dubuque Works. He retired from John Deere in 1986 after 30 years of loyal service. After retirement he enjoyed driving for RTA and drove the route to Iowa City and immensely enjoyed all the people he met while driving back and forth from Dubuque.
In the early years of their marriage they owned a cabin on the island in Guttenberg and spent many enjoyable years with their children on weekends and vacations. As a family, they enjoyed camping and that was where they could be found if not at their home. He progressed from their truck camper to their motor home, a luxury he never thought he would enjoy as much as they did. They traveled to many states and enjoyed visiting many state parks across the nation.
Jim was a hard- working, blue collar individual with a laugh that was difficult not to distinguish if he was in the vicinity. He spoke often how little they once had and yet how little it took to create happiness for them at a time when he was fortunate to be comfortable. In his later years, his faith was reignited and it was his faith that guided him through experiencing the loss of sight and the difficulties of breathing. He was grateful to be a member of his church.
He is survived by his sons, William L. (Bonnie) Powers, James K. Powers, and daughter, Lori Tillman, all of Dubuque; grandchildren, Dr. Lisa London, of Chicago, IL, Billy (Kristle) Powers of Dubuque, Jacey (Brian Shea) of Belmont, WI, Paige (Eric) Powers, of Chilton, WI, Michael (Keri) Tillman and Tracy (Steve Weiler) of Dubuque, step- grandson, Thom (Sheri) Wasmund, of Lena, IL; 7 great- grandchildren; brother-in-law, LaVern (Gayle) Reiter and sisters-in-law, Virginia Lyons, of Dubuque and Carol Godwin, of Galena IL; numerous nieces and nephews; and Karen Smith, a special Goddaughter.
He was preceded in death by his wife, Anna Mae; parents; brothers, Robert (Jo) Powers and Larry (Carmen) Powers; sister, Rosemary (Lloyd) Valley; nieces, Michelle Powers, Susan Lyons and Linda Lyons; mother and father-in-law, Leo (Esther) Reiter; brothers and sisters-in-law, LeRoy Reiter in infancy; Merlin (Janaan) Reiter, LeRoy Lyons, Francis Callahan, Lacy Godwin, Bob Brotheridge, Homer (Marion) Jewell, Orvetta Reiter and Jeanette Reiter.
A James K. Memorial Fund has been established.
The family would like to give a special thanks to the doctors and staff at Unity Point Health- Finley Hospital, Manor Care, Hospice of Dubuque, Mary Schmidt of Resurrection who faithfully brought Dad Communion, and to the EMT and first responders for their exceptional care and compassion.
Read Less 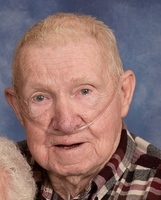