To share your memory on the wall of Judith Siegert, sign in using one of the following options:

Print
Judith (Judy) Ann Siegert, 77, of Dubuque IA, passed away on July 31st at Unity Point Hospital with her sister by her side, due to underlying medical issues and recently contracting COVID-19.

A private family memorial will be held at a ... Read More
Judith (Judy) Ann Siegert, 77, of Dubuque IA, passed away on July 31st at Unity Point Hospital with her sister by her side, due to underlying medical issues and recently contracting COVID-19.

A private family memorial will be held at a later date. The Egelhof, Siegert & Casper Westview Funeral Home and Crematory is entrusted with arrangements.

Judy was born on Aug 22, 1942 in Dubuque, Iowa, the daughter of Arnold and June (Walser) Siegert. She was a confident, accomplished RN, who used her skills to travel the world. After graduating from Finley Hospital's nurse training program in the early 60's, she worked in Boulder Colorado, British Columbia, Ontario, Hawaii, and Florida. She then travelled through and sometimes worked in Tehran (Iran), South Africa, Australia, and New Zealand. She backpacked in Nepal and spent time on a Kibbutz in Israel. She spent many years working in Los Angeles. She worked several years at a US military hospital in Augsburg, Germany. She also worked as a prison nurse in Camden, NJ. She returned to California to work in San Francisco, and finally settled in Temecula near Los Angeles to work as an occupational health nurse. Her aunts Betty and Vera lived nearby, and they enjoyed local restaurants and year round good weather. Judy also found out that she was a good waitress when she helped out at Aunt Betty and Uncle Bob’s mexican restaurant in Crestline, CA. She and Betty spent a lot of time together and became very close. Her nephew Jeff lived nearby in San Diego and later Pasadena and visited often. Health problems eventually led Judy to move back to Dubuque to be near her sister Sandy and the rest of the family.

Judy's compassion, empathy, and pragmatic nature served her and her patients well as a nurse. She did private duty nursing for Phil Silvers, Sammy Davis Jr., John Ritter's mother, and Walt Disney. She worked with Dr DeBakey, the surgeon renowned for pioneering the first successful heart transplant.

Judy was an extremely thoughtful and generous person, who expected nothing in return. Although she did not have children of her own, she was very close to her two nephews and niece and gave them some experiences they will never forget. She took her niece Jodi to Hawaii for her sixteenth birthday, where she learned a quick lesson on independence and self-assurance by flying alone on a plane, taking a cab alone from LAX to Santa Monica, and experiencing an earthquake while alone in Judy's apartment. She hosted her nephew Greg on an extended trip to California as he worked in various places in Los Angeles and San Francisco. They spent time having dinner together and going for walks at Santa Monica and Venice Beach. Her nephew Jeff recalls running with her to catch trains or ferries all over Germany, France, Spain, Portugal, Italy and Greece - imbuing in him some of her confidence and grit to overcome unforeseen challenges.

Judy was also an avid reader and could easily read a book in a day's time. She enjoyed going to the movies, although you could never sit next to her because she talked through the entire thing and had conversations with the characters on the screen! She was also an animal lover and had many furry friends over the years, including horses on the farm, her Arabian horse in California, her dog Tasha, and cats Tabitha, Hijack, Hunter and Bogart.

Judy is survived by her special friend Roy Child of Port Orange FL. The family was unable to reach him, but he called three days after she died because he knew something was wrong. He said, “I’ll never forget her, I loved that little girl.”

The family wishes to thank Dr. Ringold, Dr. Putz, Dr. Powers, the staff at Tri State Dialysis, the staff at Eagle Point Place, and the nurses at Unity Point 5 North and ICU.

Our family would like to give a heartfelt thank you to Dr. John Whalen for his care and compassion, and for giving us the precious gift of six more years with Judy when she was under his care.

Judy,
You are our hero, so brave, love always and forever.
Your family
Read Less

To plant a memorial tree in honor of Judith Siegert, please visit our Heartfelt Sympathies Store.

Receive notifications about information and event scheduling for Judith

There are no events scheduled. You can still show your support by sending flowers directly to the family, or planting a memorial tree in memory of Judith Siegert.
Plant a Tree

We encourage you to share your most beloved memories of Judith here, so that the family and other loved ones can always see it. You can upload cherished photographs, or share your favorite stories, and can even comment on those shared by others. 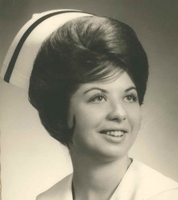