To share your memory on the wall of Richard Hennings, sign in using one of the following options:

To send flowers to the family or plant a tree in memory of Richard Hennings, please visit our Heartfelt Sympathies Store.

Receive notifications about information and event scheduling for Richard

You will receive any future notification messages.
Print

We encourage you to share your most beloved memories of Richard here, so that the family and other loved ones can always see it. You can upload cherished photographs, or share your favorite stories, and can even comment on those shared by others.

Posted Dec 12, 2018 at 10:34am
Dear Ramona, Lyle, James and family, My sympathy to all of you during this difficult and sad time. It was an honor and privilege to meet and care for Dick. Our hope is he is at peace and with the Lord now. What loving care was given him. May God's grace and good past memories help you now. Know that many thoughts and prayers are coming your way.
Comment Share
Share via:
LR

Posted Dec 12, 2018 at 08:44am
Our love and prayers extend to each of you in this time of loss. May the Lord surround you with His comfort, and remind you of His eternal promises.

Flowers were purchased for the family of Richard Hennings. Send Flowers

The Hennings Family purchased the The FTD Eternal Affection Arrangement for the family of Richard Hennings. Send Flowers 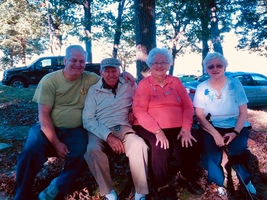 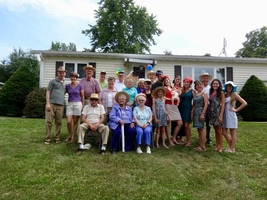 A great day for a birthday party with hats. I remember uncle Dick sitting in the back yard helping me pull weeds. His laughter, smiles, presence, kindness is is gift in our lives.
3
4
Add Photos
Upload up to 10 images at a time, max 8MB each